Why Monogamy Did Not Work For Me 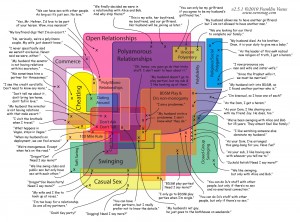 Looking at my past through the filter of the lessons I have learned from the books I have been reading.  I was unfaithful to almost every woman I ever dated.  In every relationship I was in in when I started to develop feelings for another woman I was always faced with the same three choices.  1. Repress this feelings and continue.  When I did this it always manifested in anger, resentment and a feeling of incompleteness.  2. Act on my feelings leading to my cheating on and  betraying my partner.  3. Leave my partner and start a new relationship with the person I had developed feelings for.

I did all of these things again and again in an endless pattern – often I did all three in a single relationship most often in that precise order.

Becoming married was my first real attempt to break this pattern.  I thought marriage with its oath to forsake all others was my way out.  I stuck to it – I never cheated on her throughout our marriage.  Yet I was deceiving myself I was just doing an alternate form of #1 – repressing.  I was repressing who I truly am, I was avoiding ANY situation that might lead to temptation not giving myself a chance to develop feelings for someone else by avoiding anyone else or even the risk of meeting someone else.  This became untenable when our sex life dried up entirely – I took refuge in spirituality. It helped and it continues to be the single greatest thing that has happened to me – if it took the breakdown of my marriage to bring me closer to the TRUTH of who I am, (who we all are) it was worth it.

Along with the spiritual truth I have also learned a truth for the world of form – I Ryker Adams am POLY and with that there is a fourth option.  The world of Polyamory of ethical non-monogamy.

About the author: We are a local Montreal couple (BG) helping to bring excitement and fun into consensual girls lives through threesomes with us, roleplaying, and sexual education and tips and tricks.

Links to Products of Interest